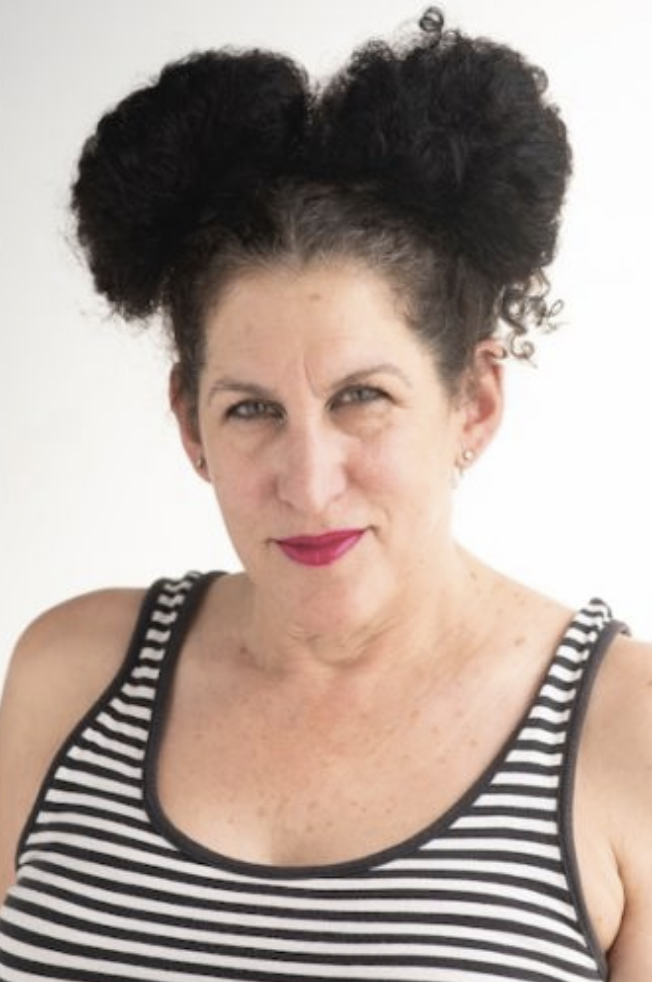 Amy Kaps is an artist of many stripes. She practices variable combinations of performance, installation, photography, painting, video, music, spoken word, collaborative, interdisciplinary, and conceptually formulated works. Also, her aesthetic signature is the stripe, as she constantly imagines a world constructed of black and white patterns, punctuated with a witty hot pink. Though she works with landscape and architectural site-specificity, both her objects and actions are always situated on the body — her body — as a poetic narrative continuum examining identity, gender, mystery, equality, art and fashion history, and political reality. Her newest work introduces the character of Amy G. Dala, who plans to stripe the inside of your head.

L.A. WEEKLY: When did you first know you were an artist?

AMY KAPS: Hard to say but in college I did a lot of theater and after college with an honors degree in psychology, I was focused on performance and poetry. I also spent a semester in Japan with a mentor from Japanese theater. My father thought I could do it as a hobby and should get a job or become an optometrist like him. I moved to the East Village instead and started working for an art management consultant and lived with a poet and performance artist. I knew then for sure. That was 1981.

What is your short answer to people who ask what your work is about?

I am primarily a performance and installation artist possessing a predilection for the surreal and abstract with an emphasis on the human form and condition. With the intention of altering perception and provoking thought, I create a gestural language that is universal — celebrating the similarities in our differences. As performance is temporal, this is often expressed through photographs and video. Sometimes I appear as a living sculpture, other times as a theatrical character. The piece dictates the medium although my palette is dominated by black and white stripes and pink.

What would you be doing if you weren’t an artist?

A psychotherapist. People have been coming to me with their issues since I was a teenager. I have a knack for analyzing the big picture and offering objective advice and solutions.

Did you go to art school? Why/Why not?

No. I am fortunate that my parents were very interested in culture. My art education began at an early age with frequent trips to MoMA and other museums of NYC, Broadway shows, ballet, and tap dance classes beginning at the age of 3, and music lessons. I was never really a fan of figurative art until I lived in Europe. At the age of 21, I moved to Germany where I lived for 13 years. That was a whole education in and of itself.

Why do you live and work in L.A., and not elsewhere?

L.A. is an entertainment capital and a fresh breeding ground for creativity. The pace of NYC was too fast, Germany, too cold and wet. I really wanted to live by the ocean, yearned for sunshine and was looking for a new playing field.

When was your first show?

My first bona-fide performance was at Charlotte Moorman’s 15th Annual Avant Garde Festival in NYC. That was in 1980. My debut performance in L.A. was at Glaxa for the Damaged Goods series put on by Carol Cetrone in 1995(?). My piece “Decent Exposure,” was a virtual striptease.

I was slated to be in an exhibition this May curated by Ichiro Irie centered around collaborative artists. I have been working with the painter Kaye Freeman together with whom we created “Anatomy of a Painting,” an exhibit at MOAH Lancaster in 2018. Hopefully the exhibit will occur at a later date. My last solo show was in Barcelona in November 2019 entitled, What’s Black and White and Pink allover? It was an installation, an exhibition of photographs and several performances.

And at the beginning of this pandemic, I participated in Call and Response, an online exhibition initiated by Kristine Schomaker. I had recently unearthed a concept that I further developed in the process. “It’s all in her Head” is based in reality, but it is all in her head! I embody the character of Amy G. Dala.

Although a proponent of heightening the awareness of our instincts, the amygdala is responsible for the fight or flight impulse — but I do not want my life to be dictated by fear. So I fight against the impulse to be afraid of the pandemic and the government…anyway, stress reduces our immune system. The brain, containing molecular intelligence, energy and electro-chemical signals, creates a reality pieced together by memory. No objective reality exists. Each species sees only what it has evolved to see.

The physical aspect of this performance is anchored in a Cerebral Crown —a massive headdress from which “Matter” is extracted. For Call and Response I was paired with the assemblage artist David Isakson. I suggested that he help me create a cerebral crown. Several iterations were created and I will see if any of them actually work for a live performance. In the role of Amygdala, I will create an image; an internally generated reality on the web of a wall or stage design with pre-set positions, like an embroidery template. Through time, a spectrum will be revealed. It’s quantum, baby. Quantum.

What artist living or dead would you most like to show with?

Do you listen to music while you work? If so what?

I used to play in bands and the more music I made, the more I appreciated silence. However these days I listen to an eclectic selection of music from Bach’s Brandenburg Concertos to Lizzo.